Gillette Tries It Again, But Will It Get Its Purpose Bang for Its Marketing Buck? 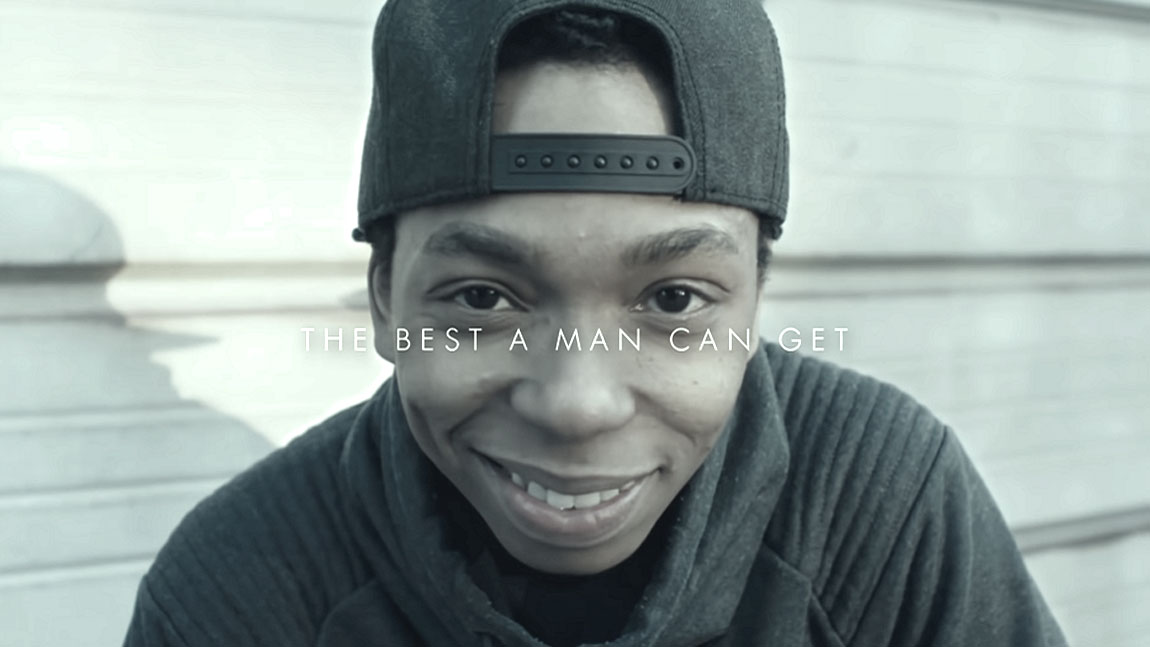 Here’s a great read from Martin Schiere, marketing strategy lead at Glocalities and one of this year’s exciting REBELS AND RULERS speakers. Learn how the Gillette team could have saved a lot of time, money, energy, and audience animosity had they just read into the data.

In its new First Shave campaign (see below), Gillette again wades into the highly polarized debate about gender roles in society by trying to redefine ‘what it is to be a man.’ In a beautifully executed and authentic spot, Gillette shows a dad teaching his transgender son how to shave. After the consumer backlash that followed Gillette’s previous accusatory Toxic Masculinity campaign, Gillette this time strikes a remarkably different tone. Consumer insights into motivational values reveal that the new spot is much better attuned to Gillette’s consumer base than the one before. But will it give Gillette the biggest purpose bang for its marketing buck?

With the First Shave campaign, Gillette tries again and strikes a different tone. This short, one-minute-film launched at the LGBT Film Festival in Toronto on May 25th was directed by Angie Bird. It got its tone of voice spot on. It focuses on Samson, a young transgender man, learning how to shave with confidence, a key value that the film is trying to convey. Apart from this, the spot subtly focuses on the father-son relationship and indirectly on the values of responsibility of fathers towards their families and the values of caring and compassion that go with such a relationship. These values are very much in line with the key values of the current Canadian Gillette Consumers (see table below). 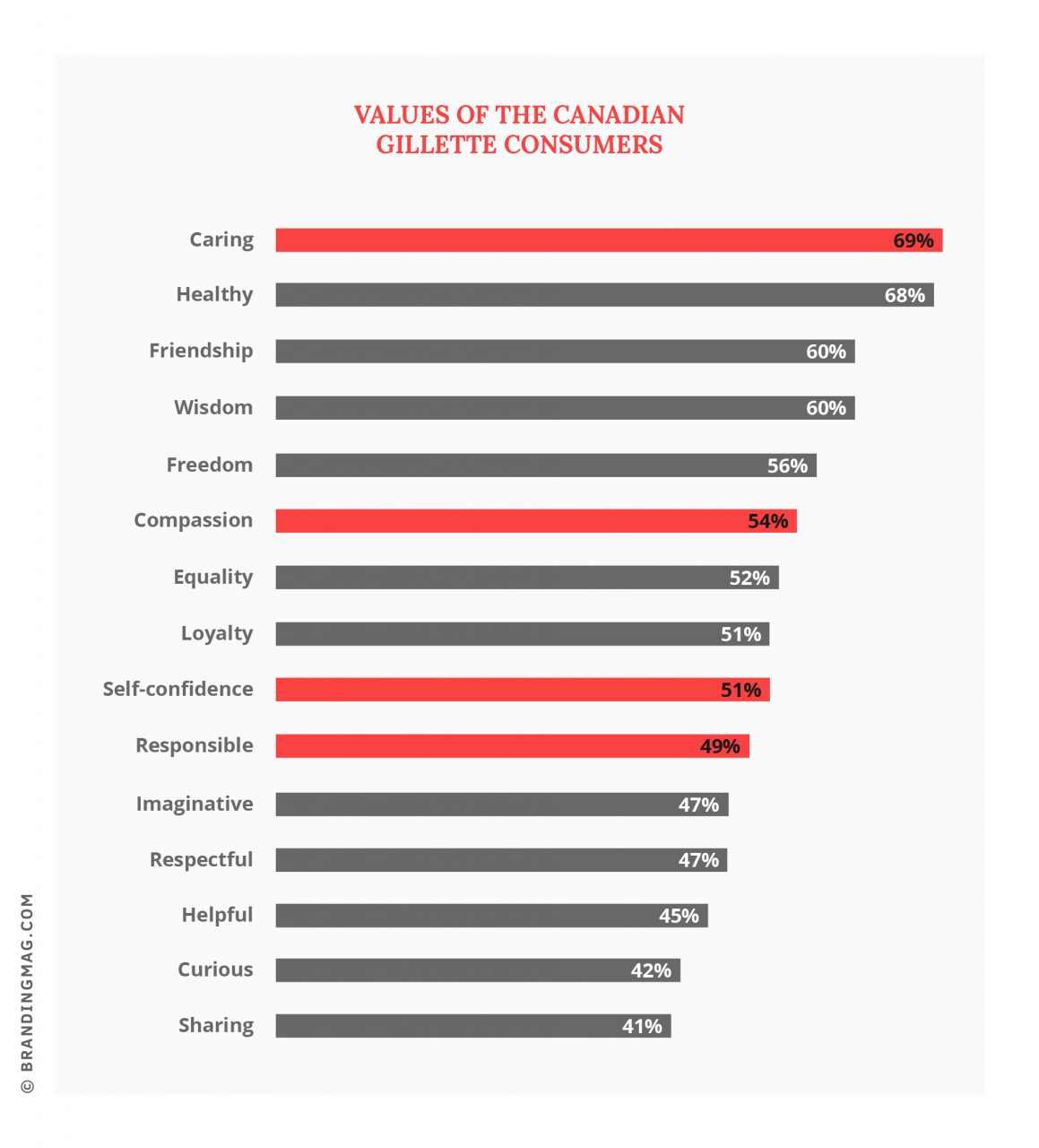 In addition, by tactically tying the spot into the LGBT Film Festival in Toronto, Gillette assured itself of some additional media spin and smartly launched the spot in a more progressive-liberal market where LGBT and transgender rights score higher as important issues. Below, you can see a quick comparison between the structure of Canadian and US societies. As the data points out, compared to the US, Canadians strongly over-index on motivational consumer segments that are more personal-freedom-orientated. Both the Socializers (sociability seekers who love entertainment, freedom and family values) and Creatives (open-minded idealists who adhere to self-development and culture) strongly over-index in Canada versus the US. And, on top of that, there are significantly less Conservatives in Canada (see the Motivational Values segments of Canada, compared to those of the US). 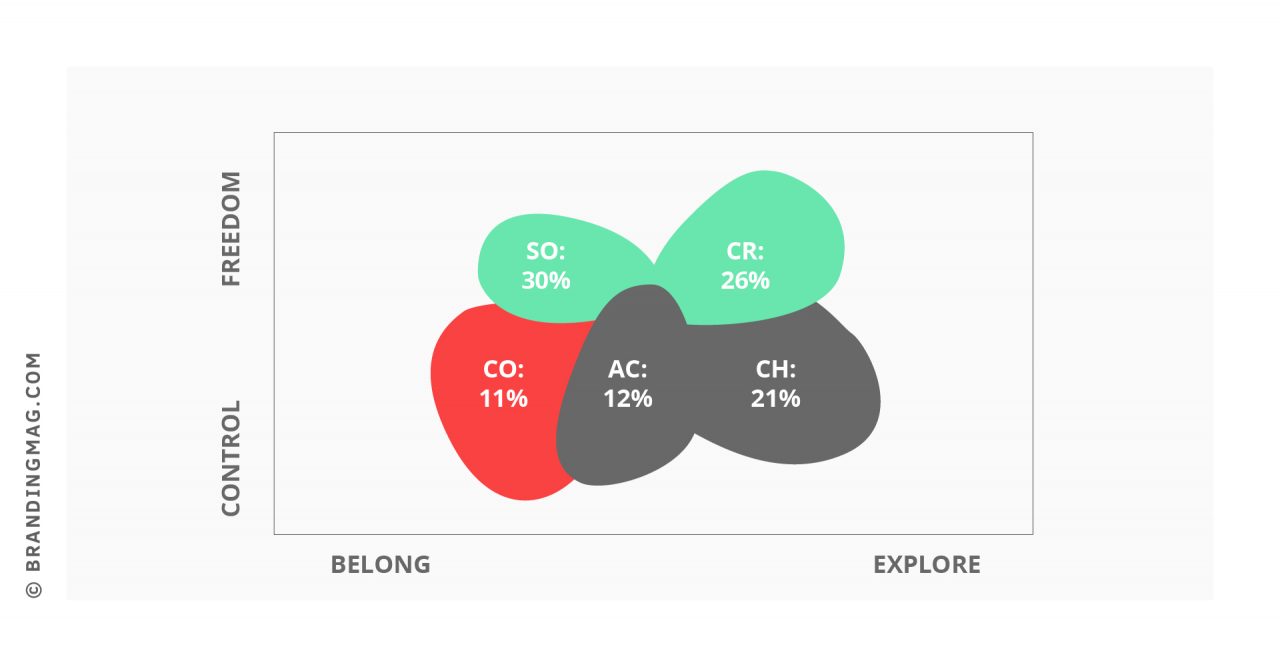 Comparison of the structure of Canadian and US society based on the sizes of the Motivational Values segments. Canada has relatively more Socializers and Creatives and relatively less Conservatives compared to the US. (n=4202, 2019, Source: Glocalities Marketing Program). CR: Creatives. Open-minded idealists who adhere to self-development and culture. SO: Socializers. Sociability seekers who love entertainment, freedom and family values. CO: Conservatives. Family oriented people who value traditions, etiquette and an organized life. AC: Achievers. Entrepreneurial networkers, who focus on family and community life. CC: Challengers. Competitive careerists, fascinated by money, taking risks and adventure.

However, you might still wonder if Gillette made the right strategic decision with its choice of topics. Gillette consumers are not particularly interested in LGBTQ and gender issues, while they do score high on a number of other concerns, such as child protection, human rights, and fighting poverty. 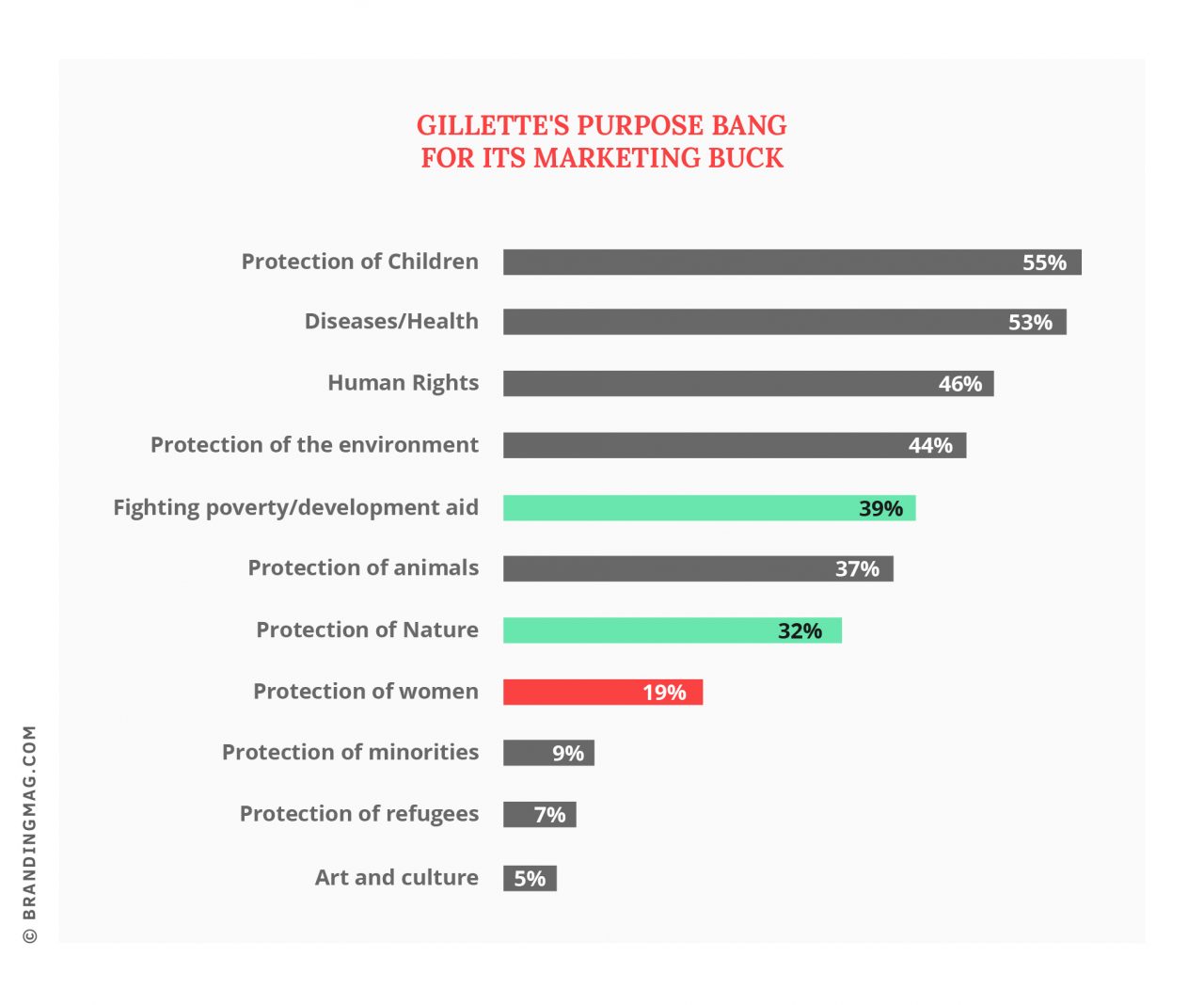 If the goal of Gillette was to attract younger and more progressive users into its franchise, then this new campaign could be helpful. However, as an established brand and category leader, such an approach could also come at the expense of Gillette’s current massive user base.

And if the goal of Gillette is to nudge its army of users into making the world a slightly better place, then there are plenty of other issues that Gillette could use to build its purpose-based marketing campaign in a way that resonates more with its consumers. By engaging its consumers on issues that matter to them and not only issues that matter to Gillette’s marketeers, the organization has more opportunities to induce change, build a stronger brand, and also sell more razors. It will, ultimately, get more purpose bang for its marketing buck.

Join REBELS AND RULERS on October 17-18 to learn more about reading into the psychographics of your target audiences in order to build efficient and effective brand and marketing strategies.

The article was originally featured on Brandingmag.com.