Why Did Lacoste Ditch Its Legendary Crocodile Design? 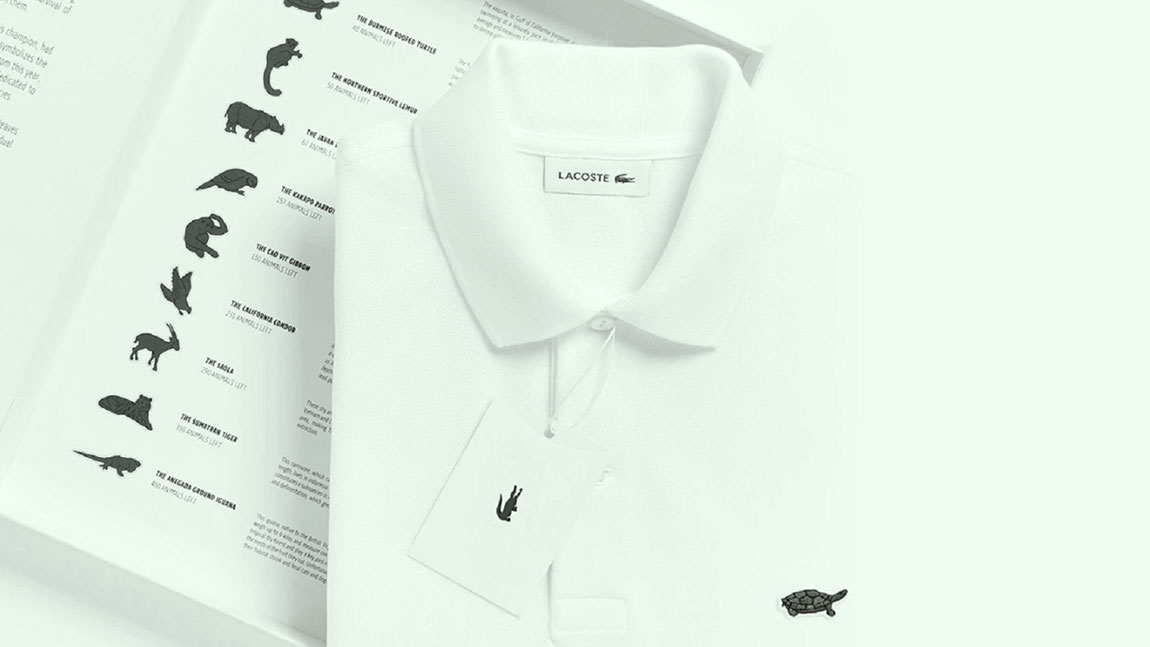 When René Lacoste embraced the crocodile emblem 85 years ago, he didn’t think that the reptile would one day disappear completely. So, in 2009, the brand that wears his name developed a program through which it aims to protect as much as it can of the ecosystem in which these fearless animals live. Almost 10 years after the launch of this project, Lacoste felt that there’s more it can do for nature and, therefore, expanded its ecosystem protection project. While doing something almost unimaginable.

For the first time in Lacoste’s history, the French clothing brand decided to leave its famous crocodile logo aside and make room for silhouettes of other beautiful animals which, sadly, are threatened with extinction. The change does not come as part of a rebranding project that spins around Lacoste itself but rather shows the company’s will to help International Union for Conservation of Nature (IUCN) fight the extinction crisis.

As a part of the NGO’s “Save Our Species” campaign, the fashion giant launched a new collection of its world-famous polo shirts adorned with silhouettes of ten different endangered species. The limited-edition clothing line was officially launched at Paris Fashion Week 2018 and, according to Lacoste, the polo shirts were a hit.

In partnership with BETC agency and with the help of the organization, Lacoste identified ten species that might soon become extinct, unless immediate action is taken. Inspired by the aesthetic lines and embroidery characteristic of the iconic crocodile, the fashion brand’s studio designed a set of new logos.

Only 1,775 polo shirts were made. Yes, you’ve guessed right, the number was not randomly picked. Each model was produced to correspond with the remaining population sizes in the wild.

Based on the brand’s calculations, the world currently hosts 450 Anegada ground iguanas, 350 Sumatran tigers, 250 Saolas, 231 California condors, 157 nocturnal parrots known as the Kakapo, 150 Cao-vit gibbons, 67 Javan rhinos, 50 Northern sportive lemurs, 40 Burmese roofed turtles, and only 30 Vaquita specimens left in the wild. The price of each shirt was set to €150 and all proceeds went to IUCN which will use the money for wildlife conservation worldwide. In case you weren’t fast enough to get your hands on one of Lacoste’s limited-edition polos but still want to join the cause, you can do so by stirring up conversations on social media using the #LacosteSaveOurSpecies hashtag. If you feel like the initiative deserves more than a simple share, feel free to donate as much as you can and help save the cute, endangered animals.

Even though Lacoste is committed to protecting the planet, it isn’t clear if the brand is dedicated 100% to sustainability. According to Rank a Brand, the largest sustainable brand-comparison website in Europe, Lacoste received the lowest sustainability score possible, the E-label, in 2017.

The result was calculated based on this sustainability report. The company didn’t pass the test and earned the “don’t buy” status “by communicating nothing concrete about the policies for environment, carbon emissions or labor conditions in low-wages countries.”

Some may consider that the brand isn’t the best when it comes to sustainability. But with the “Save Our Species” initiative, Lacoste proves that at least it is trying to do its best to save nature and its endangered species.

Given that the collection has sold out in just a few days after the launch, one can conclude that Lacoste’s contribution to help fight the extinction crisis was done the right way. And then we can only hope it will do more to reach higher ranks on the sustainability side.